Now imagine the same child on the same swing and rather than getting distraught, she tells you what she wants.  She signs “faster” or she signs “slower” but either way she communicates her needs to you before frustration sets in.

Two more words that you can introduce via sign language are “same” and “different”.  Imagine all of the  scenarios where you can help describe things or situations with these two little words.  For example, toddler wants to play with a small truck that another child already has in his possession.  You walk over to the child with another truck and tell him it is the “same” because it is like the other truck.  The child looks at you and points out that he thinks it is “different” by signing the word for “different.” He notices that the color is different, or the wheels, or the size.  You support him by giving language to his signs.  “You see that the trucks are different. They are not exactly the same.  But they are both trucks.” 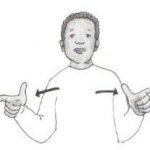 and he responds with, “sooner.” 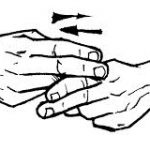